Selected members of the audio fraternity were invited to listen to such famous BBC loudspeaker designs as the LS5/8 and LS3/5 monitors from behind a curtain, after drinks and canapes, as part of the design and commissioning process. 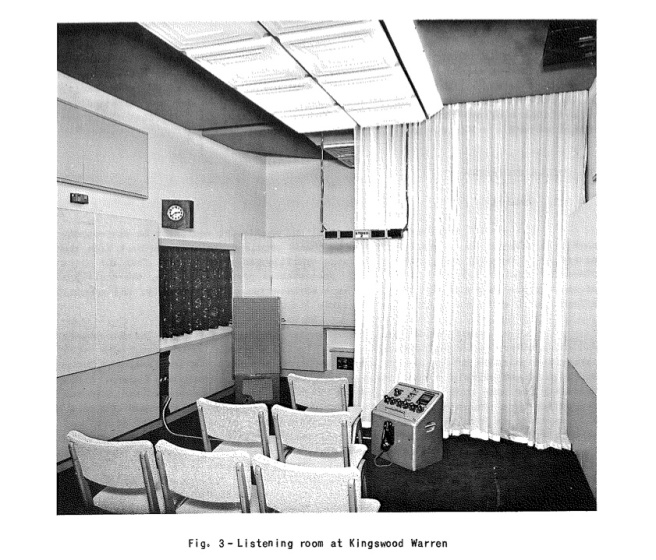 After the R&D establishment was relocated, the Kingswood Warren was re-purposed by EVE’s Radiophonic Studio as a unique mixing system, primarily for mastering use by Eve Mastering. Sadly the field telephone is missing, but everything else remains.

The Kingswood Warren is unique in being entirely modular. A vertical modular mixer!

Everything is patchable, with particular attention being paid to impedance matching between building blocks across the system to maintain level topology.  The entire system operates at 600 Ohm.

Whilst the original design did not require dedicated amplification being purely passive, the Kingswood Warren is now powered by 1950s ultra linear BBC Type B valve line bridging amplifiers, with the ability to switch via cross patching to BBC Type B microphone amplifiers, decade attenuators and external amplifiers if and where desired.

The mixing console is based on a passive constant impedance design, having the unusual feature of mechanically ganged faders, making it ideal for stereo work. This is achieved through an amazing precision engineered cog system using machined brass teeth.

Special thanks to Chris Chambers, Alistair Biggar and Phil Macbean without whom the Kingswood Warren would never have been possible.